Day two brought the infamous climb to the Dead Woman's Pass where I repeatedly proved to the group that my ability to adjust to the altitude was poor, at best. That climb was one of the hardest things I have done in a long time and I'm very thankful to Paul, our guide, for giving me the encouragement I needed to carry on despite my fairly obvious struggles. Food on day two somehow managed to top day one.

Day three began with a rough climb where I once again demonstrated my top notch ascension skills. I really don't know that I could have made it up that section without Paul's generous help and words of encouragement. Finally, we crested and began a rather serious downhill section that lasted the rest of the day. When I say serious downhill section, I mean 'serious' downhill section. Thousands of stairs that we frantically tried to descend before the rain came in. Though the weather did not cooperate, a few of us were able to make it over to some jungle ruins toward the end of the day that offered spectacular views of the mountains. In all honesty, the rain amplified the view as we were able to watch the unique cloud formations roll over the peaks into the valley. It's a sight that I will never forget. The food on day three once again topped the food on the previous two days. Though I was still feeling quite ill from the altitude, the tastes and presentation of all of the meals were top notch and I really wish I could eat that well back at home.

Finally, on day four, we woke up well before dawn to get in line for and then race up the trail to the Sun Gate. Admittedly, I was exhausted by the time we reached the Sun Gate, but the exhilaration of finally seeing the city of Machu Picchu made all of that fade away. After a relatively quick descent that offered incredible view after incredible view of the city, our group finally made it into the city and I was blown away by the history, the views, and the mystery of our destination. Any explanation I can give you, won't do the experience of seeing Machu Picchu justice. It really is something you have to see for yourself. Though we only got boxed breakfasts to go in preparation for our climb, the food was still fantastic on day four.

- Inca Trail : fantastic experience, though much more difficult that I thought it'd be.

- Paul: life saver, incredible sense of humor, and very knowledgeable about the Incan Civilization, the Inca Trail itself, and South America in general. He really made the trip for me.

- Porters: unbelievably impressive work ethic and they always had camp perfectly set up well before we arrived each night.

- Chefs/Food: wide variety of some of the most spectacular food I've eaten in quite a while. I cannot say enough good things about the chefs. I never thought I'd eat this well on this trip. 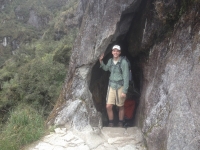 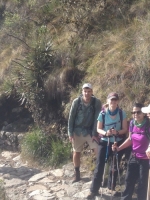 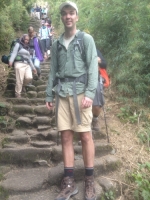 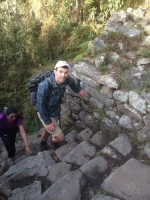