We are experienced trekkers from Australia and Germany. To begin with we were hesitant to do the Inca Trail because of the costs, and the fact that the trail conditions seemed so rigid. We agreed though that it was the only way to see the famous trail so decided to take a tour with Inca Trail Reservations . We were told by other people, who did the trek in the past, that the second day is the hardest day, so that a porter is recommended.

We decided that the extra expense was too much for our own porters and are glad that we chose to carry our own gear, as the second day wasn't as bad as we were advised despite poor weather.

On completion of the trek, we both agreed that the money we spent was appropriate for the amount of porters (8 trekkers had 8 porters, a guide and cook) The quality of the food and cook, and attentive guide was of a high standard. Also we were sure that the porters didn't have more than 20kg on their backs as we were told prior.

We must also say though, that the trail is busy, in particular the final day, and the state of the toilets in most camps was grim.

Also you should know that Aguas Calientes is a very expensive town compared to the rest of Peru, and you may look at trying to change your train ticket prior to leave before 18.45pm, as we missed the views from the train as it was dark, arrived back in Cusco at 11pm (a long day since we got up at 3.30 am on the last day) and also had to spend a lot of time and money in Aguas Calientes waiting for our train to leave.

To sum up our experience, we believe the costs were high for 4 days trekking, but we believe it appropriate, and the Inca Trail is definitely worth doing, and doing with Inca Trail Reservations. And we must also say that book ASAP as places fill very quickly! 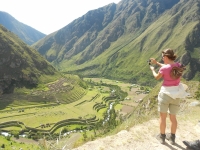 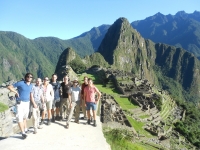