Overall, this was quite the adventure! The guides were great, the cook was phenomenal, and the porters were nothing short of amazing.

The first day was an early wake up call to head to the trail, but worth it. It was a nice preparation for the rest of the week. We had beautiful weather while hiking, and it was fairly flat with a few archaeological sites to visit. It began to rain on and off, but it was a nice hike. The lunch and dinner was nothing short of amazing. In the middle of dinner, it started pouring rain, so we headed to bed early to prep for the long day to come.

The second day we woke up early to pouring rain, which was not great, but was doable...I'm glad I bought some rain pants. It was a very long, tough day with rain, freezing cold, and snow at the top of Dead Woman's Pass. Apparently snow is rare, so I, glad we got to experience extreme weather. It was a great experience and was beautiful to see the downhill to the campsite.

Day three was one of my favorites. It was the longest day, but one of the most beautiful. We saw many very cool sites and it felt like we were in jungle. It was mainly downhill, so a little hard on the knees, but worth it.

Day four was a 3am wake up call, but we were the second group to control and some of the first people to Sungate, so it was worth it. As the clouds cleared we got a,axing views of Machu Picchu. It was a short trek to Machu Picchu, which was beyond amazing.

We opted to do the additional hike up Huyanu Picchu, which was tough because we were tired, but had amazing views.

Overall, this was an a,axing adventure I will never forget and would definitely recommend to a friend. Everyone involved was so nice and accommodating, and made the trek life changing. 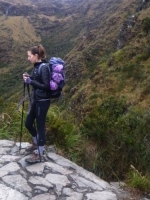 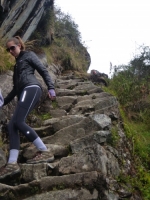 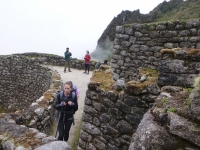