I had an amazing experience being a part of the Inca Trail group that left on the 3th of April, and came back on the sixth.

Starting with the group meeting the day before I will have to say that my first encounter with the guide, Richard, was funny and at the same time a bit weird, since Richard insisted on using the term family about our group, which to me at first seem a bit silly, but later experience gave proof to the feeling of being part of something bigger than just a group. Beside the silly parts, the briefing was in general quite good, lay out of the plan, room for any questions.

> Continue to the actual track. I would say that in general the whole track was rather enjoyable, even though at times it was hard. The track on the first day was by far the easiest, and the accommodation by far the best, since its preferable to sleep on grass rather than on rocks and gravel.

> The second day's track is by far the hardest, hiking up to the Dead Woman's pass at 4200mts, and in my case in rain and fog so the view was ruined and the only motivation was to get to the campsite as quickly as possible.

> I will at this point make a recommendation to bring a warm sleeping bag, preferably one that goes minus 10 degrees. Because stupid as I am I choose to bring my own and ended up with a cold. Which pretty much ruined the rest of the hikes for me.

> But even though having a cold the views and the fun with the group(family) during the wonderful dinners made it all worth while. And arriving at the Sun Gate on the last day and seeing Machu Picchu bathed in the early sun makes a good reason for choosing this exact trail.

> In all a highly positive and amazing experience made even better with good food, funny porters and an extremely capable, funny experienced guide. 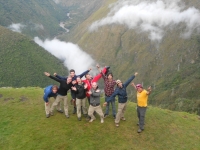